This Afternoon
A 30 percent chance of rain, mainly before 4pm. Patchy fog. Otherwise, cloudy, with a high near 42. South wind around 10 mph becoming west.
Tonight
Cloudy, then gradually becoming partly cloudy, with a low around 23. Blustery, with a west wind 10 to 15 mph increasing to 20 to 25 mph after midnight. Winds could gust as high as 40 mph.
Monday
Sunny, with a temperature falling to around 17 by 5pm. Blustery, with a northwest wind 15 to 25 mph, with gusts as high as 40 mph.
Weather forecast provided by weather.gov.
Search 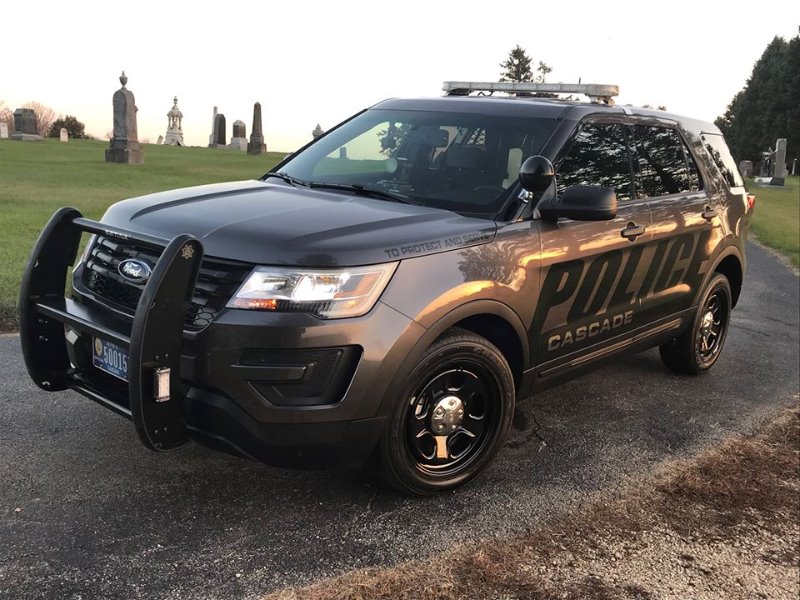 The Cascade Police Department serves the City of Cascade with emergency and non-emergency services.  The department services include, but are not limited to police emergency, crime prevention and education for organizations, civic groups and private business.  The Dubuque County Sheriff’s Office has an official School Resource Program with the Western Dubuque School District.  The Cascade Police Department teaches DARE/Keepin It REAL and works closely with the schools within the school district.  The police department is based on community oriented police services.

The City of Cascade sits within the jurisdictional boundary of Dubuque County and Jones County.  The Cascade Police Department is an active participant with the Jones County Emergency Response Team (JCERT) and is a member of LEIN in Region #3.

The department has one full-time patrol vehicle and another vehicle that can be used for emergency or as a second patrol vehicle during busy times of the year.  The primary patrol vehicle is equipped with a video camera, stop sticks, and emergency services equipment.  The Cascade Police Department carries the X26 Taser as a non-lethal option.

In August of each year the Cascade Police Department helps to sponsor a National Night Out.  On this night the community comes together at the Cascade Community Park to enjoy entertainment, food, and demonstrations by community members and business owners.